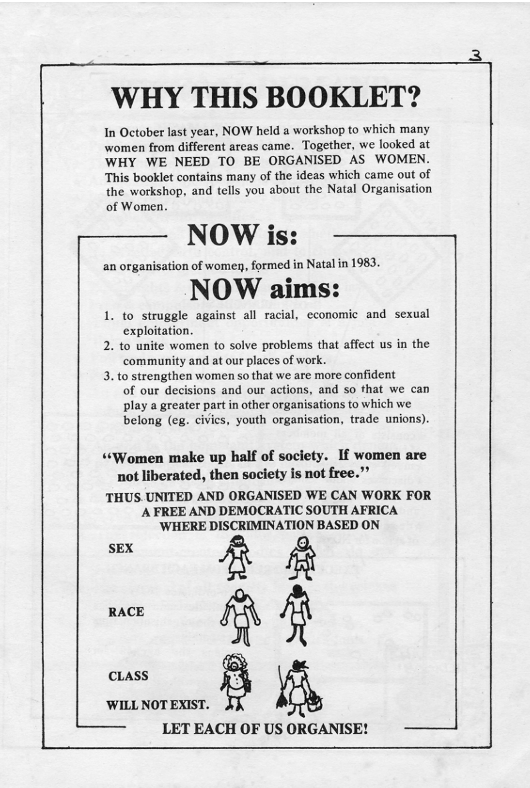 The primary source highlights the groups aims, as well as who they appealed to and the demographics that they were comprised of. While NOW was a women’s group, and fought for the rights and equality of women, they also fought for political reform of the apartheid regime.[2]

Also, Apartheid was in place in South Africa from 1948 until the 1990s. It was a system of institutionalized segregation on the grounds of race. Many complex laws were instituted by the government to keep non-whites separate. Inter-racial sex and relationships were punishable by law. Non-whites had dedicated land areas dedicated to their specific race where they were allowed to live, this was known as the Land Act. Women’s organizations that had a political agenda appealed to females at the time because they felt that they were often ignored at organizations where men where present, such as groups fighting primarily for racial justice.[3]

Women’s organizations in South Africa felt that they should be inclusive of all races to diversify their reach.[4] However, NOW was the only group like this, that worked across race, in Natal at the time.[5] This was particularly important during apartheid because it promoted unity and gave strength to the oppressed classes and races.[6] However, it also complicated logistics and meetings. With pass laws and travel routes intended for getting poor black and colored individuals merely to and from work, it was impossible to find a place to hold meetings that everyone could attend.[7]

NOW affiliated with the United Democratic Front (UDF), a political party that stood in opposition to apartheid and the governments proposed constitutional reforms.[8] NOW originally affiliated with the UDF in order to merge their demands as women with their demands against apartheid.[9] They felt that it was a development that made sense because it linked women’s struggles to struggles for democracy, and women’s rights were intrinsically linked to the struggle for democracy.[10] However, it was a controversial affiliation because it caused a shift away from the associated women deciding what they felt necessary to advocate for, towards merely becoming the voice of women for the UDF.[11]

NOW fought across the racial divide against the lack of maternity benefits and childcare, as well as for equal work opportunities.[12] There seemed to be an institutional oppression of women; they were narrowed into traditionally female oriented jobs, it was not required that women be paid the same as men for the traditionally unfemale jobs that they could get, and taxes were imposed on women that brought an income back to her family if she was married – penalizing her for contributing to her family.[13] In terms of their struggle against apartheid, NOW fought against pass laws and the Group Areas Act, the high cost of living, the creation of the tri-chimeral parliament, and adequate healthcare facilities.[14] These demands show that while NOW was focused on Women’s Rights, they were very much placed in the context of apartheid, and the unique struggles faced by women during that regime. While women were fighting for their rights and freedoms, they were also fighting politically for human rights.

The women in these organizations believed that a struggle for national liberation, and a struggle for women’s rights should, nor could, be dealt with separately.[15] Women involved in these organizations, such as NOW, faced harassment and violence from men that did not support their aims. Women were murdered, raped, detained and tortured. Often, effort was not even made to investigate those cases, thus many perpetrators were not prosecuted.[16] Women in these groups were willing to jeopardize their safety to fight for what they believed in.

Overall, analyzing NOW as a women’s organization highlights the complexities of apartheid. Women felt they were not heard in organizations where men were present, and they felt they had a responsibility to take action for the changes they wanted to see. While they faced challenges, they worked against all odds to get their message heard.

Michaela is a sophomore majoring in English and double minoring in Psychology and Journalism. They are originally from Cape Town, South Africa. Their hobbies include photography and hiking. They are an avid reader.

Gender and Sexuality Throughout World History by Michaela Barrett is licensed under a Creative Commons Attribution-NonCommercial 4.0 International License, except where otherwise noted.