A four-page, ten paragraph manifesto became a powerful source created by lesbian activists in the early 1970s to address both sexism and homophobia. It was written during the period of second-wave feminism[1] where radical feminism[2] emerged. Many thoughts in the manifesto overlapped with second wave radical feminism ideals. The manifesto was important to both the history of women’s rights and queer identified movements. It sought to create a separate, autonomous identity for lesbian women. It also articulated the struggles of lesbians, especially within the women’s liberation movement, but also firmly stated their view for their search for equality within the larger women’s liberation movement. In the early 1970s, not only did lesbians have trouble when it came to articulating their place within this movement as well as their place within a male-dominated society, but they were also blatantly discriminated against and excluded from the women’s liberation movement. What made The Women Identified Woman such an important manifesto was that it acted as a voice for lesbians to communicate to other women as well as this heavy male-dominated society their rightful place. They projected their struggles in regards to existing in the feminist movement and how they were excluded and discriminated against. 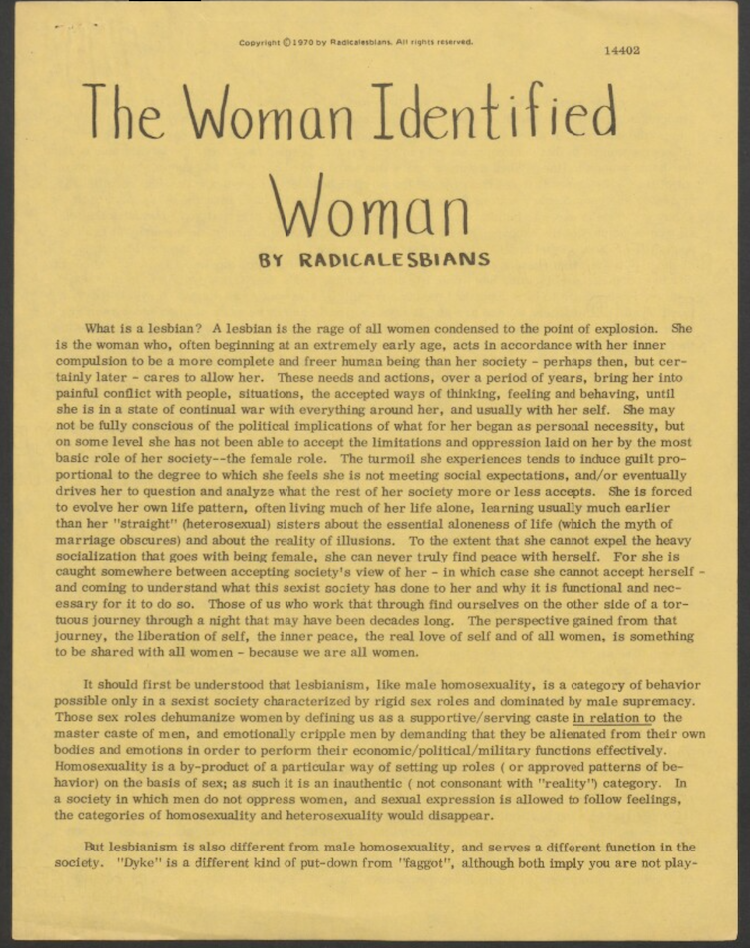 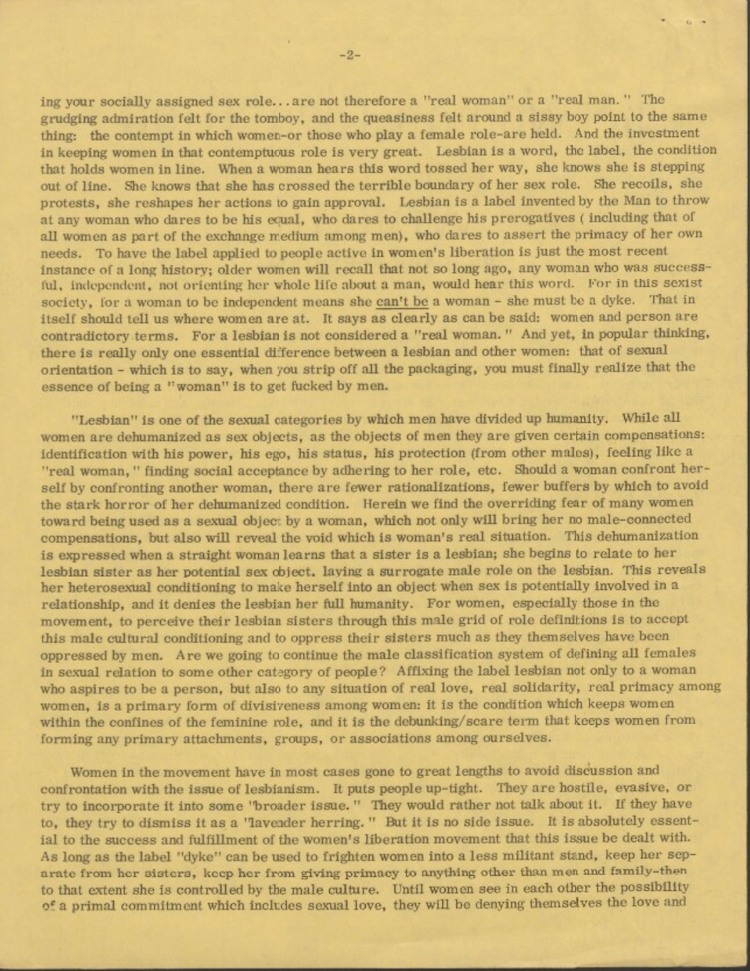 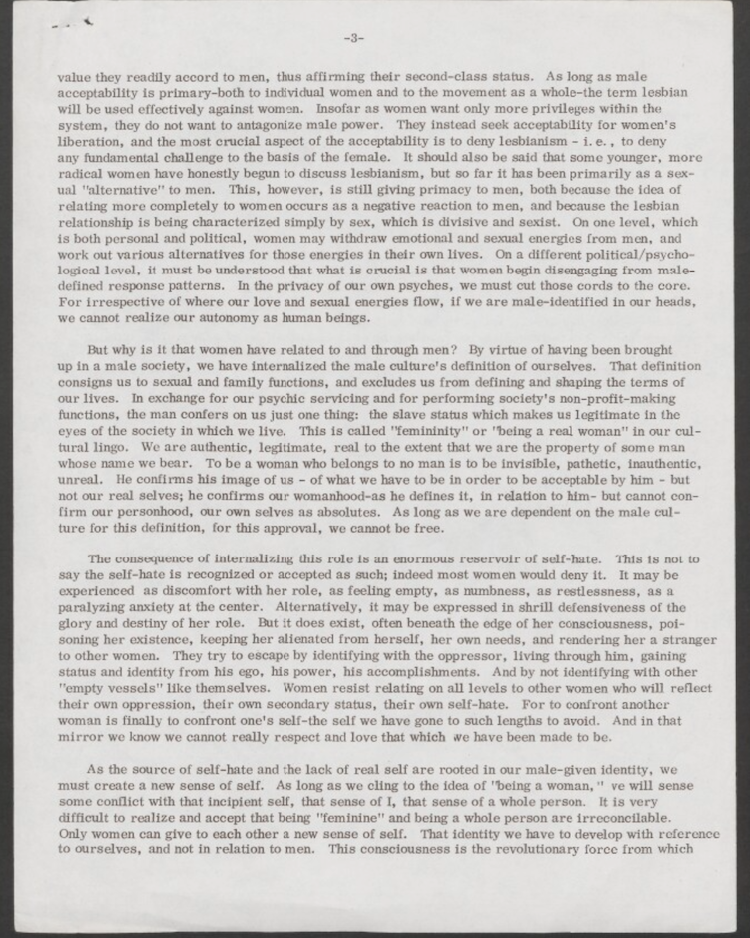 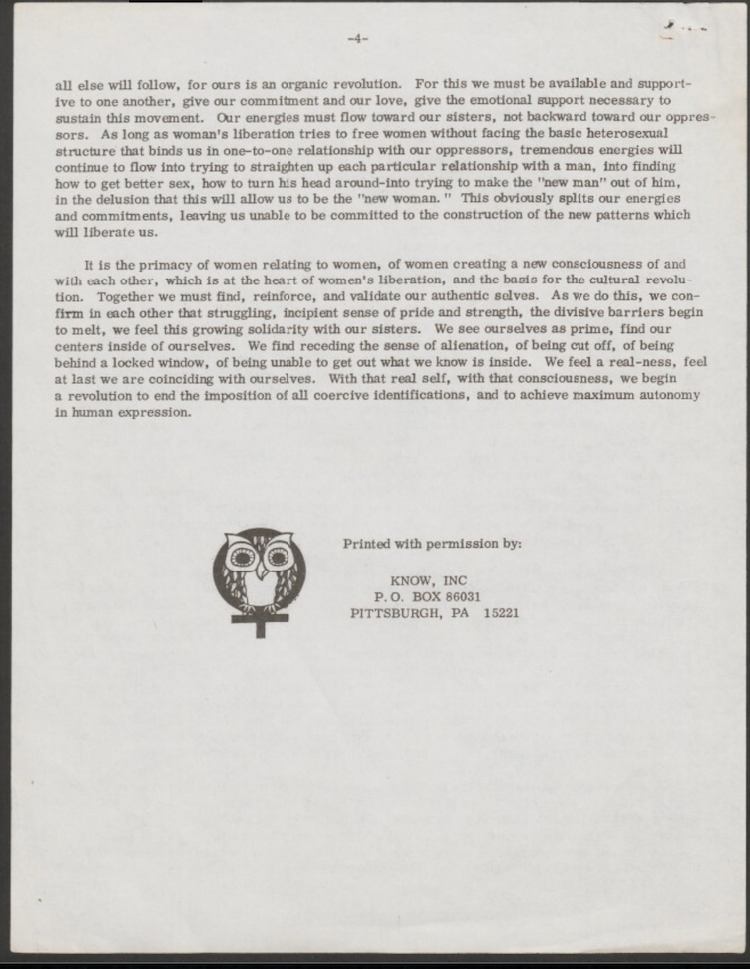 This manifesto states that a lesbian is the rage of all women condensed to the point of expulsion.[4] This term holds much more meaning than people really care to think about. This manifesto explains and emphasizes the importance of this term and how society has potentially used it as a derogatory term to call women out for not “being a real woman.” The text directly states that the term “lesbian is a word, the label, the condition that holds women in line” which ultimately limits their power in the eyes of men and in society.[5] If society as a whole is being dependent on male culture to define and control the definition of a lesbian, no woman can really be free. Heterosexual male culture should not be able to define womanhood or anything remotely close to it because it is not theirs to control. The term has been used and thrown around to any woman who dares to be independent and challenge the power of men. The underlying negative connotations that have grown on the term over time are tremendous and can be seen when we look at lesbians in relation to the women’s liberation movement.

Many radical women actively have embraced the slippage between the terms “lesbian” and “feminist” in order to emphasize the argument that all women, regardless of their desires, were oppressed by compulsory heterosexuality. Even if a woman is a lesbian or heterosexual, she is still being oppressed by heterosexuality in a way that ends up alienating the term “lesbian” no matter what, considering it is not a part of the heterosexuality “normal” that many people still follow. The term “lesbian” has held onto many of the associations that the Radicalesbians describe. Lesbianism, to some extent, is still associated with masculinity or androgyny— and is often imagined in opposition to femininity, even as some lesbians are feminine and some masculine women are not lesbian. This can relate to where Brownmiller[6] in 1970 reportedly refused an invitation to speak to the staid lesbian organization, the Daughters of Bilitis (DOB)[7],because “she thought lesbians hypersexual and oppressively male”. A number of radical feminists agreed with Brownmiller that “lesbians were too attached to sex roles, in the form of butch-femme roles, to be likely or desirable recruits to feminism”[8] This was a direct stab at lesbianism considering Brownmiller declared them basically unfit to be a part of the feminism movement and associated them with masculinity or androgyny. Not only does this not create progress within the movement, it demeans a form of a woman who should be included. Furthermore, “straight” and “lesbian” are still framed as binary in which straight is imagined as normal and lesbian is imagined as the opposite of straight. The term “lesbian” has so many underlying negative connotations that could have contributed to why they were excluded from the second wave of feminist movements in the 1970s.

It is crucial to note that sexism and homophobia existed in more virulent forms in 1970 than now which has contributed to the negative associations that have accrued overtime in relation to lesbians. The biases towards lesbians made it very hard for them to find their voices within women’s liberation movements. “Those feminists who believed in a global sisterhood found it easier to attribute the conflicts to political adversaries than to acknowledge the formidable obstacles to female unity.”[9] Many women within the movement found it easy to disregard obstacles, in this case, accepting lesbians into the movement, and turn their attention elsewhere even when their first priority should be to unite all women. This can be seen within the National Organization for Women[10] As a whole, this organization had many issues with being inclusive towards lesbians and their role within the movement. Many leaders disputed lesbian involvement and visibility in the National Organization for Women. The founder, Betty Friedan commented in 1966 that lesbians were a “lavender menace” and suggested that they threatened the political efficacy of the organization and of feminism.[11] This is an instance where lesbians had been alienated from the movement even when they are also women. The energies, in this example, were not flowing toward other women (like the Radicalesbians wanted), but were flowing backward toward oppressors.[12] Women should not be flowing against other women and with the oppressors as noted in The Women Identified Woman because then progress cannot be achieved.

The history of publicly merging feminist and lesbian identities and activism within the National Organization for Women was not a smooth narrative and continued to be challenged. Rita Mae Brown[13], who had been trying to raise the issue of lesbianism within the National Organization for Women, was inexplicably relieved of her duties as the editor of New York- NOW’s newsletter. Brown was so angered by the organization’s homophobia that she resigned from her other NOW offices, taking two other lesbians with her.[14] The National Organization for Women as a whole had many issues regarding lesbians and their role within the movement. This situation with Rita Mae Brown shows how some women did support lesbians within the movement but they were outnumbered. At the time, NOW was an important face of the movement so to have them disregard lesbians could have caused others to disregard them as well. There was a lot of tension between activists who supported lesbians and the movement versus women who did not. This is just another reason why The Women Identified Woman was so important in communicating to all women and men that they deserved to be supported within the movement and in society.

The early 1970s played a crucial role in creating a voice for lesbians within the women’s liberation movement during the second wave of feminism. The Women-Identified Women redefined lesbianism as the quintessential act of political solidarity with other women. “By defining lesbianism as a political choice rather than a sexual alternative, Radicalesbians disarmed heterosexual feminists.”[15] It helped to communicate their place to all other feminists who deemed them unfit to join the rest of the women in the movement. Unity of all women is crucial to the success of the feminist movement so to have lesbians be excluded and looked down upon by other women did nothing but cause more unnecessary complications. The early 1970s, with the manifesto The Women-Identified Women, became an awakening where lesbians were able to express their place in the movement and where they ultimately deserved to stand.

Christine Bedikian is in her second year at Wake Forest University.

Gender and Sexuality Throughout World History by Christine Bedikian is licensed under a Creative Commons Attribution-NonCommercial 4.0 International License, except where otherwise noted.