Recently, the company Always received praise for removing the Venus symbol from their menstrual pads packaging to be more inclusive to the people who do not identify as women who have a period[1]. This was a huge step in removing stereotypes about menstruation, something societies have embedded into norms about bodies and sexuality. Menstrual product companies have not always been known to break stigmas but rather perpetuate them. In this section, I will analyze how advertisements of the early 90s reflect on centuries-old myths on menstruation and female bodies. This is proven by a Tampax advertisement from 1990 that was in Seventeen magazine. 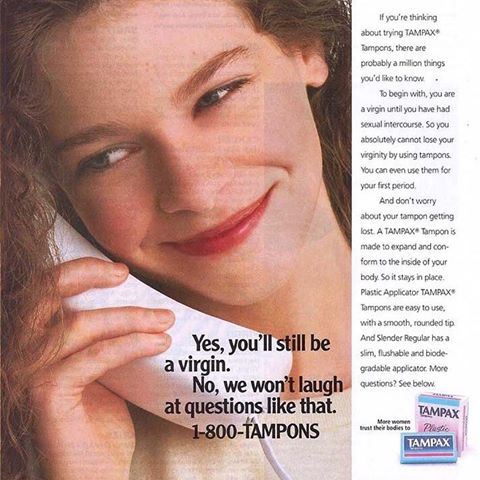 In this advertisement, Tampax is trying to sell their tampons as well as the experience of calling their hotline, 1-800-TAMPONS. Using the categories Merskin (1999) did in their study of menstrual product advertisements, scientific (diagrams, designs), athletic (activities, sports), stationary figure (posed but not engaged in activity), or no-figure (text only, cartoons), we can analyze this advertisement as stationary. If the ad was reassuring that using tampons was safe and discussed how tampons worked in a paragraph, wouldn’t it have been easier to show a diagram? Merskin’s study also calculates the textual elements used in the study: fear, secrecy, freedom, peace of mind, comfort, and other. The Tampax advertisement uses fear of losing virginity to a tampon and secrecy of having a confidential hotline to call. One would suspect that the ad would focus on the product, but Tampax is playing on the idea that menstruation is something to be feared because it could indicate you are close to losing your virginity, whether from being able to have children or from inserting tampons[2]. There had to have been a societal idea that you could not talk about your period to your friends or family members for fear of embarrassment, which is why having a hotline where you could ask questions you worried you would be laughed at for asking could have been assuring to teenagers. This fear of asking a stupid question implies that dealing with your menstruation was something you had to do naturally and on your own. While Tampax is perpetuating negativity towards not being a virgin, they do promote positivity of talking about your period.

When Madonna sang about being “Like a Virgin”, what was she actually talking about? The construction of the term “virginity” has varied from the hymen tearing to any type of sexual penetration to any type of sexual act. This ad explicitly states that you are a virgin until you have had sexual intercourse, but the emphasis on the implied importance of being a virgin is where the ad is now viewed as problematic. There are a few reasons why Tampax would have sided with many public health specialists of the 90s as they were viewing unplanned pregnancies as a national epidemic[3]. Part of this epidemic stemmed from the uneasiness most people felt talking about sex publicly[4]. If Tampax was emphasizing the value of virginity in Seventeen magazine, teenage girls would be more likely to discuss the ad with each other, thus focusing on peer support rather than relying on adult support[5]. One interpretation teens could take away from the ad is the taboo that comes with any kind of object insertion in their vagina. In order to engage in sexual activities without penetration, they construct what is called “technical virginity”[6]. Most people associate virginity with strong religious beliefs, but most adolescents who have not had vaginal sex are motivated by the desire to avoid pregnancy and sexually transmitted diseases[7]. I argue that because teenagers are more fearful of life-altering consequences from vaginal penetration than from religious beliefs, this is another effect of consistent advertisements that emphasize the importance of keeping your virginity.

In light of the strides menstrual companies have made—from inclusive packaging to the types of products available—it is important to note it has been nearly thirty years between an ad promoting virginity and the removal of female symbols from packaging. The culture of shame that this type of advertisement promoted—shame if your hymen was not intact, shame if you were raped or non-consensually penetrated, shame if you were not a woman but had a period, shame if you already used tampons without thinking about if you would be a virgin—was what made people scared to talk about who they were or what forms of discrimination they faced.

Mikayla Thomas (WFU ’20) is a Sociology major with a concentration in Health and Wellbeing.

Gender & Sexuality: A Transnational Anthology from 1690 to 1990 by Mikayla Thomas is licensed under a Creative Commons Attribution-NonCommercial-ShareAlike 4.0 International License, except where otherwise noted.