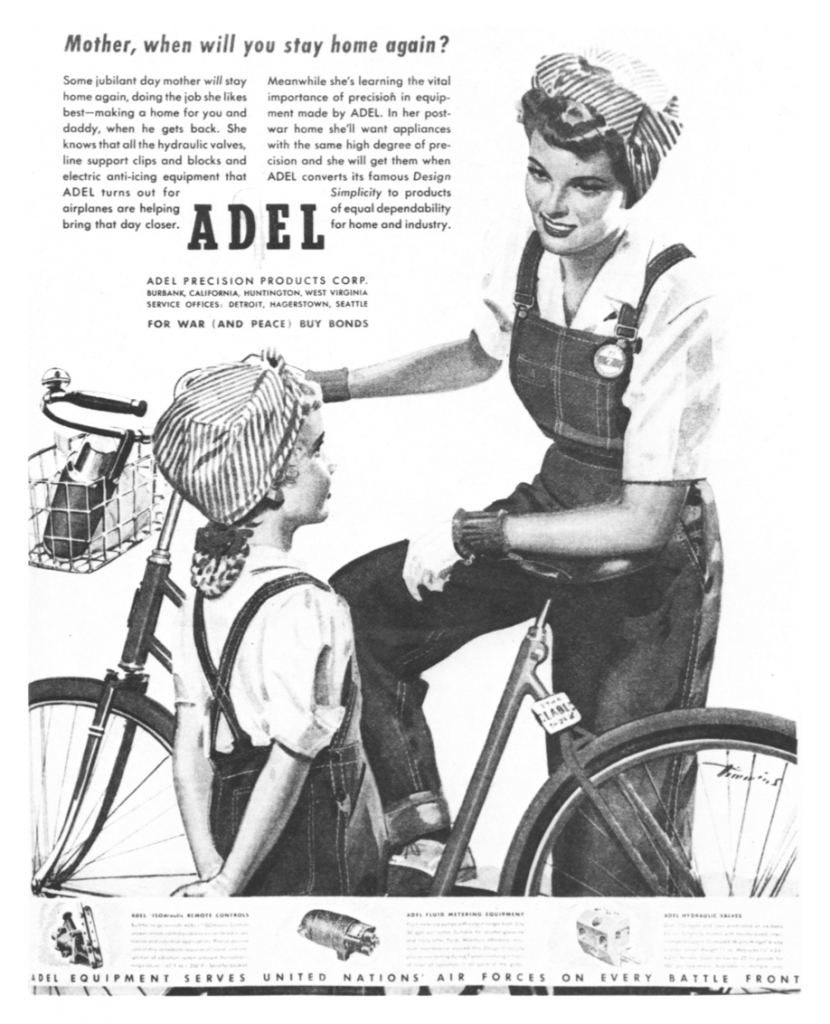 During the Second World War, the role of women was highlighted within the United States in order to mobilize the citizens to help the military effort.[1] This meant that women now had to fill-in for their male counterparts who were fighting the war on the other side of the world.[2] Shifting the expected gender roles of women made it important for advertisements to establish what these new roles were. Previously, the expected gender roles were that the woman would stay home and care for the house while the male held a job and was the breadwinner of the family.[3]

As can be seen today, advertisements are a major aspect of marketing, and it establishes a form of consumer culture by influencing the consumer to buy what they see advertised. Such advertisements targeted all aspects of a woman’s life in the United States during this time period. For example, these new advertisements portrayed women in the factory setting, previously a predominantly male-run field, and even as hard-working mothers who dedicate their work to their children and male spouse. Eureka Vacuum Cleaner Co. released an advertisement titled “Uniform… Slacks… or Kitchen Apron” suggesting that women could now have a variety of professions and no longer be restricted solely to the household.[4] To further analyze advertisements during this time and how they established gender roles, I will be focusing on an ADEL Precision Products Corps advertisement. This advertisement shows a mother and her daughter both dressed similarly as if they were to go off and work in a factory. The daughter asks “Mother, when will you stay home again?” implying that the mother’s role as a housewife changed when the husband left for a recently employed factory worker. The advertisement is for ADEL, which produces equipment for militarization as well as household products. [5] ADEL released a series of advertisements all featuring a young woman and her daughter, both tend to be white, blonde, and smiling. In all of the advertisements, the daughter poses a question often about the mother and her role in this new lifestyle or about the father as a soldier. The main focuses of these advertisements are to sell the products, bring more attention to what the corps is doing for the militarization effort, and highlighting what the ideal wife of a soldier must do while her husband is off fighting the war.

Using the six categorizations of the depiction of women by Goffman, in his Gender Advertisements, to analyze this advertisement, it will show how exclusive and structured the expected gender roles for women were at this time.[6] The first of Goffman’s categories are “relative size.” In this advertisement size does not show gender roles, instead, the relative size differentiates between the mother and the daughter. The mother is larger as she stands over her small young daughter. The second category is “feminine touch” because oftentimes the hands of women are used in advertisements to bring attention to something. In this advertisement, the daughter is holding both of her hands behind her back as if she is very calm and composed while her mother has a more relaxed hand resting on the bicycle. Analyzing this in the framework of gender roles, when her hand is looked at and put in the context of her body position, the audience can see that the mother is standing in a more masculine manner. Her body positioning seems very laid back and “un-lady-like” which would not be commonly seen during this time. This is used to show how the mother has to take on a new role that just happens to make her a little more masculine in the way she carries herself. Next is “function ranking” focusing on what positions women are given in advertisements, which tend to be subordinate to men.

As explained previously, the woman in the advertisement is in a new position that had not been available to women before. This ties to how women were not expected to be seen in this way, making the advertisements shocking and different from the rest. Fourth is the “family scene” describing how often times when there is a woman in an advertisement, she is a wife, mother, or caretaker. This is a limiting view of what a woman can be in her life and it revolves around a misogynistic culture. In this source, the woman is a mother and is being asked when she will return to her care-taking position. The description next to her also makes the woman out to be solely a caretaker and that is all she is capable of doing, “Some jubilant day mother will stay home again, doing the job she likes best – making a home for you and daddy, when he gets back.” By stating it is the “job she likes best” further limits the woman because it objectifies her and makes her a dehumanized being that has to care for the family and household over everything. The next category is not relevant to this source, but it is followed by the last of Goffman’s categories, “licensed withdrawal.” This category is to bring attention to the level of involvement of the woman shown in the advertisements. The most common way a woman is portrayed is being distracted and uninvolved in her surroundings. This can be seen in the source because the mother is smiling at her daughter and does not seem to be interested in what she is saying at all. As well, the daughter does not seem to have any expression on her face. This is used to portray the female as unintelligent, passive, and ties to the idea of female domesticity.

Women during the Second World War would see advertisements like these and connect them to the shift of what women were expected to do. No longer were they supposed to solely stay at home and care for their families, now they were expected to get a job to help the soldiers while also providing for their family, keeping the household, and taking care of the children. Although the adoption of a new position for females was a big step for feminism, the American culture did not celebrate the extremely hard work that all women had to do in order to stay afloat.

Mother, when will you stay home again?[8]

Some jubilant day mother will stay home again, doing the job she likes best – making a home for you and daddy, when he gets back.[9] She knows that all the hydraulic valves, line support clips and blocks and electric anti-icing equipment that ADEL turns out for airplanes are helping bring that day closer.

Meanwhile she’s learning the vital importance of precision in equipment made by ADEL. In her post-war home she’ll want appliances with the same high degree of precision and she will get them when ADEL converts its famous Design Simplicity to products of equal dependability for home and industry.[10]

FOR WAR (AND PEACE) BUY BONDS

Mariana Rocha-Goldberg is a student at Wake Forest University. She is majoring in History, with minors in Spanish, Dance, and Latin American Studies. In the future, she hopes to continue studying social injustices and finding ways to combat them in everyday life.

Gender & Sexuality: A Transnational Anthology from 1690 to 1990 by Mariana Rocha-Goldberg is licensed under a Creative Commons Attribution-NonCommercial-ShareAlike 4.0 International License, except where otherwise noted.