Throughout history, the portrayal of women in media has morphed to reflect the political climate and norms of the time. By looking at advertisements throughout different decades of the 20th century, we can observe patterns and meanings that signify how women were regarded in society. The following primary sources, from 1955 and 1972, exemplify the ways that the media has perpetuated and aligned with stereotypes of women. In addition, we can observe how the message being sent is a reflection of its time, and how these ads affected their readers and furthered the idealistic image of what a woman should do and who she should be. 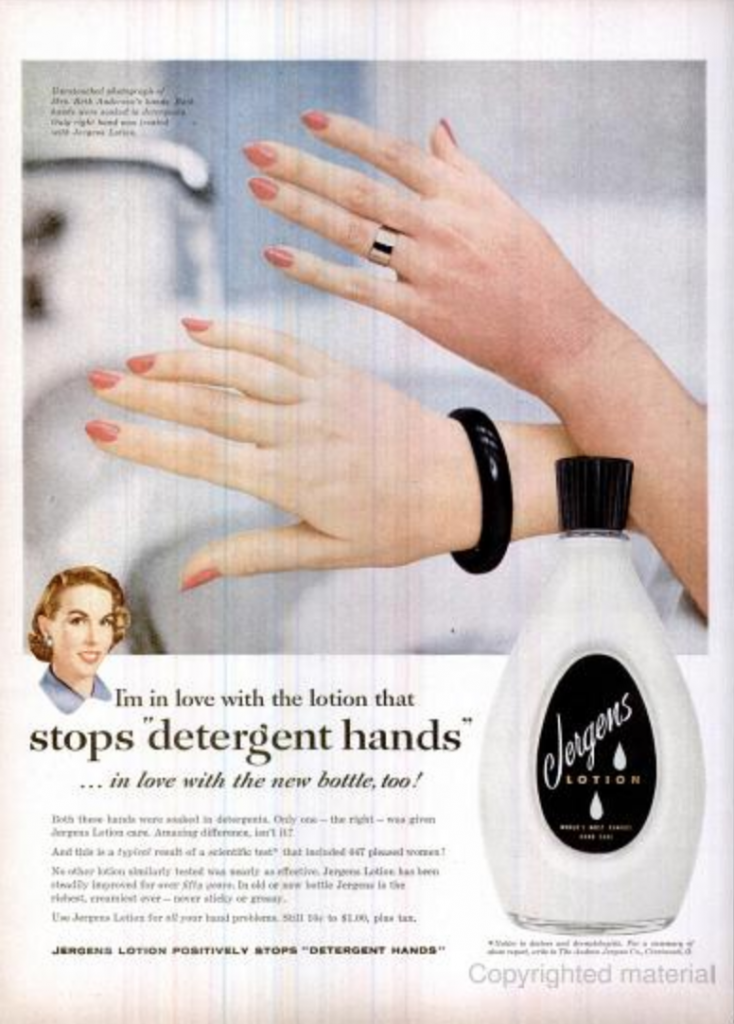 This Jergens advertisement was published in the December issue of Life Magazine, dated 1955. It is advertising targeted for a female audience, utilizing the catch phrase “I’m in love with the lotion that stops ‘detergent hands’.” ‘Detergent hands’ refers to women’s hands getting dried and cracking from excessively doing laundry. During the 1950s, Americans were adjusting to life after the war, and the traditional family model provided safety and comfort for a society in disarray. In the typical suburban family, a woman’s role was to be in the home. While the husband’s duty was to work and provide financially, the mother’s duty was to cook, clean, and tend to the children. This expectation of motherhood was viewed as moral and just, and was comfortable for American society at this time[2]. Given this context, the Jergens’ ad was curated to fit this suburban family ideal, where a woman’s biggest problem would be dry hands from doing a lot of laundry. The caption at the bottom reads: “Both these hands were soaked in detergents. Only one — the right — was given Jergens Lotion Care. Amazing, isn’t it? And this is a typical result of a scientific test that pleased 447 women!” This advertisement makes the assumption that the only member of the family that would be having dry hands from laundry detergent would be the female, aligning with the ideal suburban family typical of this era. The idea that a man might have needed this lotion for detergent hands is not even taken into account. 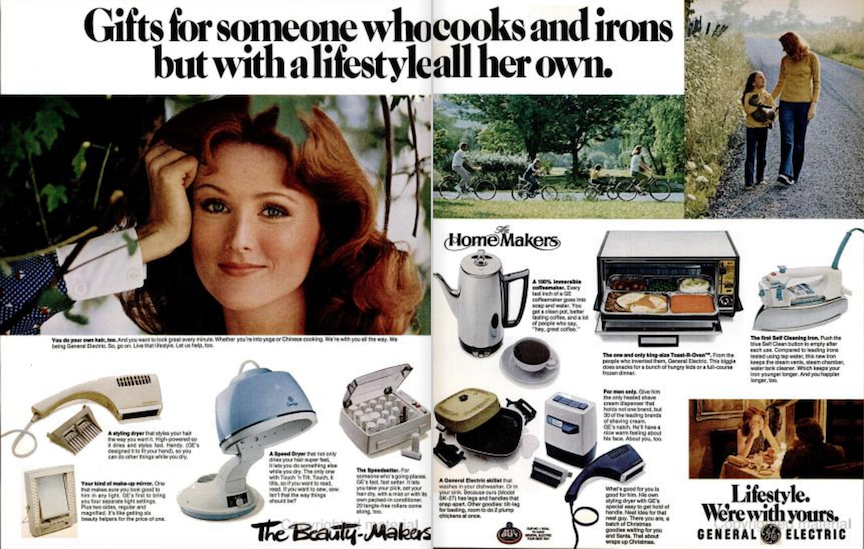 This General Electric Advertisement, published in December of 1972, offers a very different view on gender roles. This advertisement, in contrast to the Jergens ad, is attempting to portray more feminist and progressive ideals, while remaining an advertisement for home appliances directed at females. The catchphrase, “Gifts for someone who cooks and irons but with a lifestyle all her own”, is ironic in that it encourages independence and autonomy of women, yet under the confines of being in the home cooking and ironing. The photos show a mother outdoors, walking with her daughter, wearing casual clothing and enjoying a bike ride with her family. All of these activities are meant to portray the mother’s liberation, and her ability to engage in leisure activities that she enjoys, rather than solely staying in the home. The captions of the appliances also support this idea. The speed dryer’s caption states that the appliance can be tilted, reading, “… it tilts, so if you want to read, read. If you want to sew, sew. Isn’t that the way things should be?”. The caption is further perpetuating the idea that women should be able to choose how they spend their time, yet again utilizes stereotypes that women prefer to sew and read in their free time. This advertisement is still reasonably progressive for its era, seeing as the majority of ads in the 1970s still depicted women in the home, relying on male protection[4].

Research shows that the stereotypical portrayal of women in advertisements decreased very little between the 1950s and 1970s[5]. My analysis of the Jergens’ ad of 1955 and the General Electric ad of 1972 confirms, anecdotally, that those findings are accurate. The Jergens’ advertisement very clearly operates within the expectations of women from this time, with no qualms about the implications of this message. Conversely, the General Electric advertisement made a concerted effort to portray a liberated woman and appeal to the ideals of the Women’s Movement, yet it still failed to portray women as more than housewives and homemakers.

Interestingly, general interest magazines, like Life, had less stereotypical portrayals of women than did women’s fashion magazines like Vogue[6]. Life was directed toward a wider audience, reaching adults, children, men, and women. However, this begs the question of how substantial an impact these magazines can have on societal views due to their more widespread audience. The media that we consume undoubtedly has a significant effect on our perception, and repeatedly consuming these stereotype-laden advertisements only serves to perpetuate their existence.

Amelia Baker is a freshman at Wake Forest University.

Gender & Sexuality: A Transnational Anthology from 1690 to 1990 by Amelia Baker is licensed under a Creative Commons Attribution-NonCommercial-ShareAlike 4.0 International License, except where otherwise noted.