Below is an article that was featured in the July 6, 1942 issue of LIFE magazine, which includes a combination of images and text.[1] This publication was released during the United States’ involvement in World War II. Women played a crucial role in contributing to the war effort on the homefront through working jobs in factories, offices, and practices, while (mainly) men were fighting on the battlefront. An impressive seven million women who had not previously been wage earners joined the workforce.[2] For the first time, the media created an image of a strong and capable woman on a large scale through figures such as Rosie the Riveter. However, this article from the same time period displays women in a more degrading manner.

This piece contains a great deal of material that can be analyzed in terms of how women are discussed and portrayed. First, we have the image of a woman (Marjorie Woodworth) being tossed into the air by a few soldiers on the beach. The caption says “You must enjoy being bounced in a blanket by soldiers”.[3] The language of this caption, along with the image itself, is extremely condescending. It implies that men are the strong forces fighting for the country while women just sit back and relax on the homefront. Additionally, the woman in the picture is photographed in a remarkably powerless position. She appears to have little control over herself (as shown by her body position and the shock on her face), and certainly less control than the soldiers who are flinging her into the air. This clearly demonstrates Woodworth as a subordinate to the soldiers below her.

Next is the written portion of the piece. This component gives an explanation of how a woman should entertain soldiers, making it seem like the duty of a young woman to go out and charm the soldiers as an acknowledgment for their hard work in army training. Rather than advertising for substantial, meaningful work that women can engage in to help their nation in the war, they push for the superficial importance of keeping the soldiers’ company and providing them with entertainment. The language used gives the impression that putting a smile on the faces of these dedicated soldiers is the least that a woman can do for her country. It is almost as if the article is saying that women do not have other skills to contribute. To take it one step further, if they do not engage in “this type of war effort”, then the assumed alternative is relaxing at home while the rest of the country is pitching in to win the war.[4]

There are a number of words and phrases within the text that have a demeaning connotation towards women, specifically in the sense that they are inferior to men. First, we have the phrase “For a girl to keep up with their [the soldiers’] fun is very hard work”.[5] While this sentence may be included to emphasize the tremendous energy that the soldiers hold, it gives off the implication that women have to “keep up” with men, and that women are always one step behind. This same undertone is exemplified in the next paragraph, which states “The young lady proving here that she can take it for Uncle Sam is 21-year-old Marjorie Woodworth of Hollywood”.[6] This sentence is implying that a woman must “prove” herself of being capable of competing on the same level as a man. LIFE also mentions Uncle Sam here, which is a significant name to include, as Uncle Sam represents many values that hold importance on a national level. Involving this substantial character signifies that it is a woman’s duty for the good of her nation to carry out the critical work of “entertaining” the soldiers. The next phrase that has a degrading connotation to it is “Whatever the boys did, Marjorie did, or tried to do”.[7] This again provides the readers with the undertone that women will never be capable of successfully doing the same jobs or activities as a man. However, this “hard” work does have its rewards in the form of “warm masculine appreciation”, because what greater benefit is there for a woman than attention from a male?[8] The mention of this “reward” is especially disappointing. Women at this time were being recruited for jobs in the workforce by propaganda that promoted the incentive of helping the United States win the war. The United States War Manpower Commission even put out a declaration of “Women Workers Will Win the War” to emphasize the vast importance of women bringing their skills to the workforce.[9] However, it appears as though the writer of the article in LIFE magazine believes that American women think that a greater incentive than winning the war is receiving male attention.

The last portion of the text that portrays a rather demeaning message of female inferiority is when the article discusses Woodworth’s upcoming movie. The exact phrase is “Though she is a person of increasing importance in the movie world – Hal Roach is releasing her first starring picture, The Devil With Hitler – Marjorie … ”.[10] First off, the mention of this movie is rather random and unnecessary, especially within such a short article. Nevertheless, the part that is especially triggering is the referral of Woodworth’s director Hal Roach. This simple sentence brings Woodworth’s achievement back to that of a man’s. The mention of the movie is irrelevant in the first place, however the mention of Hal Roach is even more insignificant, and it connects Woodworth’s accomplishments with Roach rather than her own hard work.

Overall, this demeaning language and imagery within this article contrasts from the more positive image that Rosie the Riveter. It is possible that articles like these contributed to the failure of lasting institutional change for women in the workforce. According to Sarah K. Murnen, degrading language in this sense reflects male power over women through objectification and subordination.[11] If publications like these perpetuate the thought that women are not to be taken seriously, there is little chance that society will be eager to bring about significant change.

LIFE Magazine (1942): Speaking of Pictures … Here is a Girl’s Guide For Entertaining Soldiers 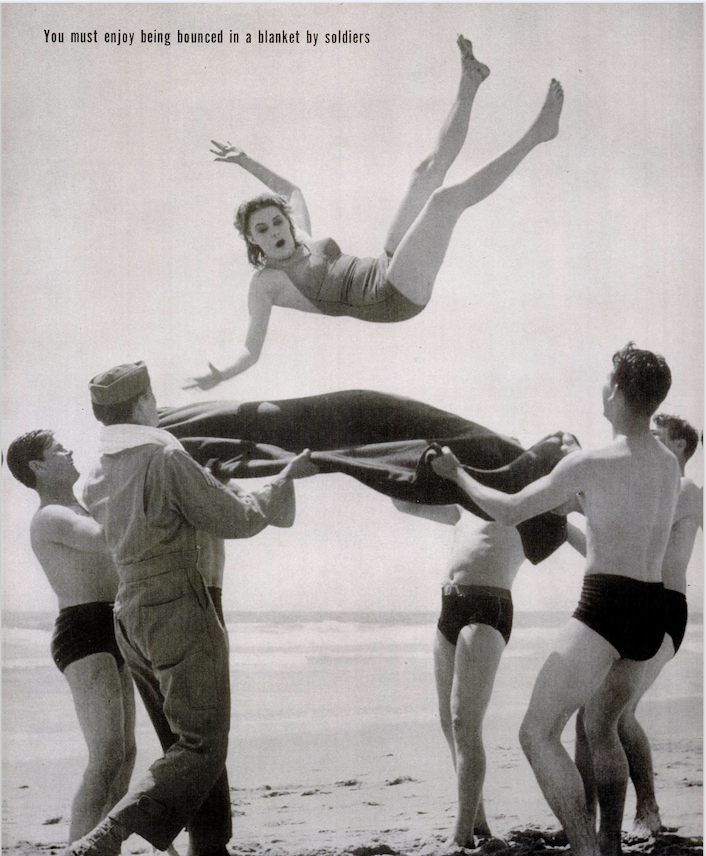 What you see here is a new pattern of entertainment for girls who visit their soldier friends in U.S. Army camps. All over the country girls are finding it a patriotic pleasure to brighten the lives of these boys, but they are also finding it no pink tea.[12] Stiff training makes the boys husky.[13] They are full of vim.[14] They are full of fun. For a girl to keep up with their fun is very hard work. But this hard work has its rewards in the form of warm masculine appreciation.

The young lady proving here that she can take it for Uncle Sam is 21-year-old Marjorie Woodworth of Hollywood.[15] Marjorie was snapped by LIFE’s photographer while visiting some of her soldier friends stationed near a Southern California beach.[16] Though she is a person of increasing importance in the movie world – this month Hal Roach is releasing her first starring picture, The Devil With Hitler – Marjorie did not go Hollywood on the boys.[17] Instead of signing autographs or dining with officers, she jumped into her bathing suit like a good sport. Whatever the boys did, Marjorie did or tried to do. LIFE herewith presents these pictures as a guide to other girls involved in this type of war effort.

Mia Dolan is a second-year student at Wake Forest University.

Gender & Sexuality: A Transnational Anthology from 1690 to 1990 by Mia Dolan is licensed under a Creative Commons Attribution-NonCommercial-ShareAlike 4.0 International License, except where otherwise noted.